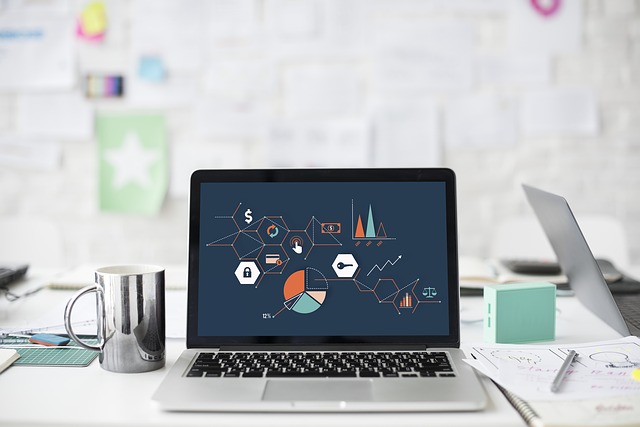 There are many times were we need to handle NULL and “empty” values in SQL Server. Note however, that there is a difference between a NULL and an “empty” value.

In this example we will examine the above cases and ways of handling it, when developing data processes in SQL Server.

Create a Sample Table with Some Data

Let’s populate the table with some data:

Note that the third record (id=3) contains an empty string for the column “name”.
Also note that the fourth (id=4) record contains a NULL value for the same column.

Sharpen your SQL Server database programming skills via a large set of tips on T-SQL and database development techniques. The course, among other, features over than 30 live demonstrations!

Identifying the Issue with NULL and Empty Values

Let’s see how can we handle the two above “special” cases.

First of all if we select all the records from table_A we will get: 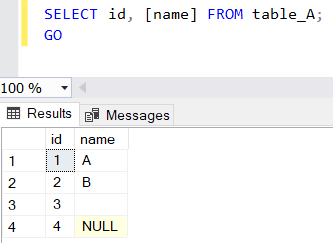 Handling the Issue of NULL and Empty Values

Then let’s try to handle the record having the NULL value and set as a new value the string “NewValue” for the result set of our select statement.

SQL Server provides 2 functions for doing this; (i) the ISNULL; and (ii) the COALESCE.
Even though the two functions are quite similar, still they have some differences:

(1) ISNULL takes only two parameters as input; (a) the expression to be checked and (b) the replacement value

(2) COALESCE takes N parameters as input (N>=2). By having N expressions as input parameters it returns the first expression that IS NOT NULL. If only all expressions are NULL it then returns a NULL value. It is like a more enhanced version of ISNULL.

Let’s try to handle the above scenario with these two functions. 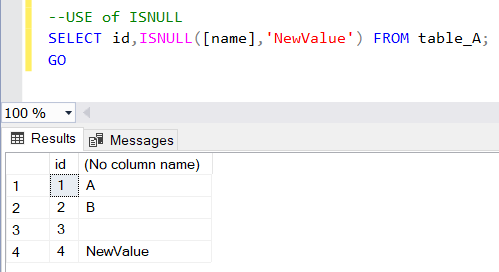 In this case it seems that the ISNULL and COALESCE functions had no effect on the third record’s result. This was expected because that record does not contain a NULL value but an empty value instead. An empty value cannot be considered as a NULL of course.

So, how do we deal with this? How can we handle empty string values?

Unfortunately there is not a “magic” formula for that. The only suggestion is not to use empty strings but use NULL values instead which can be handled by the ISNULL, NULLIF and COALESCE functions.

Introducing a Custom Function for Handling Null and Empty Values

Additionally you can always create your own user-defined scalar-valued function that can deal with the issue of the empty string values. In my example, I created the following function and called it IsEmpty:

My function takes as input two parameters; (a) the input string and (b) the replacement string.

Then by using a combination of the ISNULL function and the CASE statement it handles both NULL and EMPTY string values. Though, the above user-defined function just handles strings and not any other expressions.

Now if we try running the IsEmpty function for the same example we get the following:

You can find more information regarding the above mentioned built-in SQL Server functions that deal with NULLs on the following MSDN Library links: ISNULL, NULLIF, COALESCE.

Artemakis Artemiou is a Senior SQL Server Architect, Author, a 9 Times Microsoft Data Platform MVP (2009-2018) and a Udemy Instructor. He has over 15 years of experience in the IT industry in various roles. Artemakis is the founder of SQLNetHub and TechHowTos.com. Artemakis is the creator of the well-known software tools Snippets Generator and DBA Security Advisor. Also, he is the author of many eBooks on SQL Server. Artemakis currently serves as the President of the Cyprus .NET User Group (CDNUG) and the International .NET Association Country Leader for Cyprus (INETA). Moreover, Artemakis teaches on Udemy, you can check his courses here.

5 thoughts on “Handling NULL and Empty Values in SQL Server”

“Working with Python on Windows
and SQL Server Databases”

Learn how you can efficiently work with SQL Server databases,
via the Python Programming Language!